Minority Interest and You 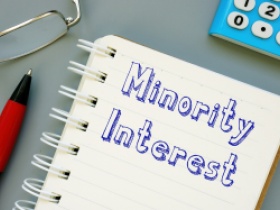 Don’t feel bad if the first thing that came to mind was the Tom Cruise movie “Minority Report” when you saw the title of this article. Minority interest, affectionately known as non-controlling interest, is not something that is usually tossed around in idle conversation; however, it recently became very topical in a ruling. The persons involved in that ruling, prior to their dispute, had probably never heard the term and probably didn’t think it would ever affect them, but unfortunately, what you don’t know can hurt you.

Many companies have full ownership of their businesses and in that case, the concept of minority interest never arises. In fact, it is only important when you have one owner having a majority interest (more than 50%) of a business and a minority owner (owning less than 50%). Therefore, at the end of the day when the company reports their hard-earned profits, they must divide up the profit according to the share of ownership. The key here is that the majority owner cannot claim all the profit for themselves because they do not own the entire company.

So, a fictional place, let’s call it the Pretty Company, has earned J$120,000,000 in net profit. They report a split of 100m for the stockholders and 20m for the non-controlling interest (minority interest) which totals the net profit reported of 120m. This breakdown is to show you how much money belongs to each entity.

Why does it matter?

If you have ever bought shares on the local market, chances are, when the various companies announce their profits, you probably take a keen interest. However, there have been a few occasions, when the headlines were somewhat misleading. Using the example above, you read that the Pretty Company made 120m, however, when you check the financials for yourself, you see that the figure that matters to you, the stockholder, is really J$100m. Simply put, a lower net profit figure will affect the ratios that you use to compare various companies. So, the Earnings Per Share (EPS) will be lower if you use the net profit attributable to stockholders and therefore the Price to Earnings ratio (P/E) will be higher. All things being equal, companies want a higher Earnings Per share and a lower Price to Earnings ratio.

How relevant is it?

In our local equity market, minority interest is a feature in companies such as NCB Financial Group, Sagicor Group Jamaica, JMMB, Panjam Investment Limited, Proven Investments Limited and General Accident Insurance, just to name a few. Minority interest can affect more than just financials, as activist minority shareholders, especially if they own more than 20% of the company, can push for changes in the leadership and other aspects of a company, but that is for another article! Happy Investing!

Yanique Leiba-Ebanks, CFA, FRM is the AVP, Pensions & Portfolio Investments at Sterling Asset Management. Sterling provides financial advice and instruments in U.S. dollars and other hard currencies to the corporate, individual and institutional investor. Visit our website at www.sterling.com.jm Feedback: if you wish to have Sterling address your investment questions in upcoming articles, e-mail us at [email protected].