Looking for redemption, call me if you can! 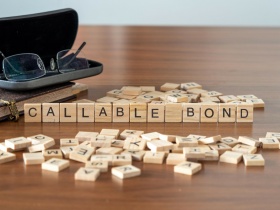 Many bonds are issued today with a call feature which means they can be redeemed or repaid by the issuer prior to their scheduled maturity date. However, the early redemption of a bond is not automatic and highly depends upon the unfolding of events at the issuer level, specifically, and market conditions in general. In other words, an issuer or borrower will decide to call its bonds if it is in its best interest to do so.

As a reminder, a call provision gives a bond issuer the option (but not the obligation) to repay the bond before it matures. An issuer will typically exercise this option when interest rates are falling as it should be able to borrow on cheaper terms to refinance debt. In such a scenario, an investor whose bond is likely to be called is exposed to reinvesting at a lower rate of return. For this re-investment rate risk, callable bond investors are usually offered at a relatively higher coupon rate, in comparison to a non-callable bond with similar maturity date and credit quality, to compensate for the re-investment risk.

In addition, bonds are unlikely to be called in a rising interest environment, such as the one we are currently observing, and expose investors to extension risk or a longer duration bond. Extension of a bond’s duration, however, is not necessarily an undesirable outcome for an investor. By virtue of the bond not being called and provided the investor is still comfortable owning the bond, he or she can continue to enjoy the same level of income for longer. Indeed, if the bond has a variable coupon rate feature, the investor may even be rewarded with higher coupons or income at each coupon reset period.

Nevertheless, some investors would prefer to have their bonds called and make the re-investment decision themselves. In a rising rate environment, they also worry that may become “stuck” with an older lower coupon bond rather than being able to acquire a freshly minted higher coupon bond. However, as suggested above variable rate coupon bonds can help to mitigate this outcome. Alternatively, such investors could opt to sell their callable bonds and re-invest the proceeds in higher yielding bonds. Investors should be cautioned though that such a strategy could result in unnecessary capital losses which may not be recovered even with higher income from the new investment.

Notwithstanding, investors need not be overly concerned about extension risk as some bonds may still be called as scheduled even in a higher rate environment. Whereas the economic or cost saving consideration usually dictates the “call” decision, other factors may be just as influential. For instance, an issuer may decide to call a bond solely to reduce its debt load. Similarly, a bank that issued perpetual bonds (bonds with no maturity date) for regulatory capital purposes may opt to repay the bond on its call date, although it may be economically unwise to do so, to maintain investor appetite or interest in perpetuals by reducing uncertainty of a call. Additionally, the bank may also exercise the call option on the perpetual bond to discourage investors from seeking higher coupons on future offerings to compensate for probable extension risk. Another consideration is that a bank may not be willing to lock-in an expected high coupon rate on a variable bond for an extended period. This can arise as in the case of many European bank perpetuals where coupon rates are adjustable (if the note is not called) and locked in for subsequent 5-year periods before being eligible for further calls.

Finally, even in a rising rate environment, calling a bond can be the best decision for the issuer as the entity may still be able to re-finance the existing bond using a lower coupon rate, particularly if its credit ratings had improved.

In summary, callable bonds are popular since they afford issuers flexibility in managing borrowing costs as well as offer investors comparatively higher coupon rates. Issuers will typically “call” their bonds as scheduled if collectively it is in their best interest to so do. As such, bonds are usually called when interest rates are falling, but not necessarily so with rising rates. Nevertheless, investors who rely on the call date for an exit can still hope for early redemption even in a rising interest rate environment.

Eugene Stanley is the VP, Fixed Income & Foreign Exchange at Sterling Asset Management. Sterling provides financial advice and instruments in U.S. dollars and other hard currencies to the corporate, individual, and institutional investor. Visit our website at www.sterling.com.jm